How broth helped me break my coffee addiction

There’s plenty of good to say about coffee, I won’t argue that. Heck, I justified my eight-cups-a-day dependance on it by citing all the studies that show it’s packed with antioxidants and can reduce your risk of colon cancer.

But there came a time recently — like two months ago — when I decided I should just try to see if I could break my coffee addiction. You know, in case I ever need to go without it.

There were a million reasons for this experiment, but the two big ones were:

a) I experience anxiety sometimes, and I began to realize that caffeine was exacerbating it.

b) My gut seemed to be really unhappy with my overconsumption of the jet fuel-caliber stuff I was making and drinking every day.

So I decided to quit coffee, and I’m so glad I did. I don’t hate on coffee, and in fact had a cup this morning. But I’m so glad that I don’t have to have it anymore. I can and do function most days just fine — even better — without it. I broke my addiction.

But I won’t pretend it was easy. For those of you who want to try this same experiment at home, here are some tips for actually quitting caffeine.

1. Start on a weekend or while you’re on vacation

Just trust me on this one. If you’re genuinely addicted to coffee, the first few days are going to be…rough, to say the least. You’re going to feel lethargic, foggy in the head and even depressed. You’re going to feel less motivated than you’ve been in a long time. You don’t want to be at work when you’re struggling through those things. Take it from the girl who also quit smoking once upon a time: Quitting caffeine is bloody hard.

Start cutting back, first, just to reduce your body’s dependence. I cut back to one cup a day for a week, and then I reduced my consumption to half a cup a day. Finally eliminating that half-cup took me a good three weeks, because I had to mentally prepare myself for the loss of caffeine and an important ritual in my day. Let me tell you, that half-cup was getting me buzzing in the mornings, though. More so than two whole cups would have done just a few weeks before hand. You don’t realize how resistant you’ve become to caffeine until you start cutting back and your body is responsive to it again. Holy moly.

If you’re serious about eliminating something from your lifestyle, you need to find a healthy alternative to replace it. For me, it was bone broth. Instead of stumbling into the kitchen each morning to put the kettle on for my coffee, I stumbled into the kitchen and heated some bone broth in a saucepan — thus replacing an old ritual with a new one. There was no vacuum in my morning where there had once been coffee. There was simply something new. You can substitute herbal tea, water and lemon (I alternate between broth and water/lemon now), kombucha or any number of other things. Just make sure you’re not giving yourself an opportunity to twiddle your thumbs over the morning paper/iPad/TV show and miss your java.

4. The first week is the hardest

I won’t lie, the first week is intense. It’s most tempting to give up on your resolve when you’re at work and feel like your mind is fuzzy and could use some sharpening with a good cup of joe. But power through it, my friend, because once you get past the first three or four days, then you’re home free and you won’t ever again need to drop dimes on coffee just to think straight. It’s truly empowering.

5. Once you’ve broken the addiction, let yourself indulge sometimes

Like I said, I still enjoy a cup of coffee now and then. It’s delicious. It’s comforting. It reminds me why I quit. I don’t need my cortisol levels at “Someone’s holding a gun to my head” levels at all times. It’s nice to feel that little burst of energy once in a while, but I’m so grateful I don’t need it anymore. I can just enjoy it as a luxury. As it should be. 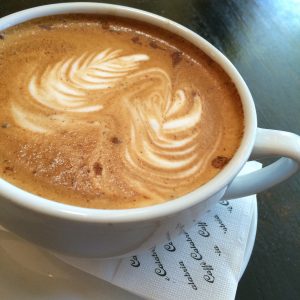 How To Heal Leaky Gut? Top 6 Foods and Lifestyle Changes